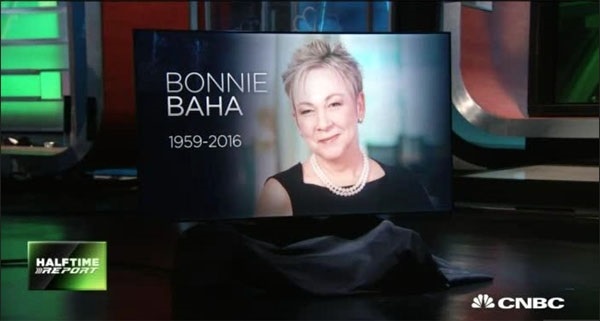 Where were you when you learned that The Challenger exploded? Where where you when you heard that MLK Jr. was assassinated? How about JFK? What were you doing when you got the news that Curt Cobain died? Whitney Houston? Michael Jackson? Buddy Holly? Otis Redding? Prince? 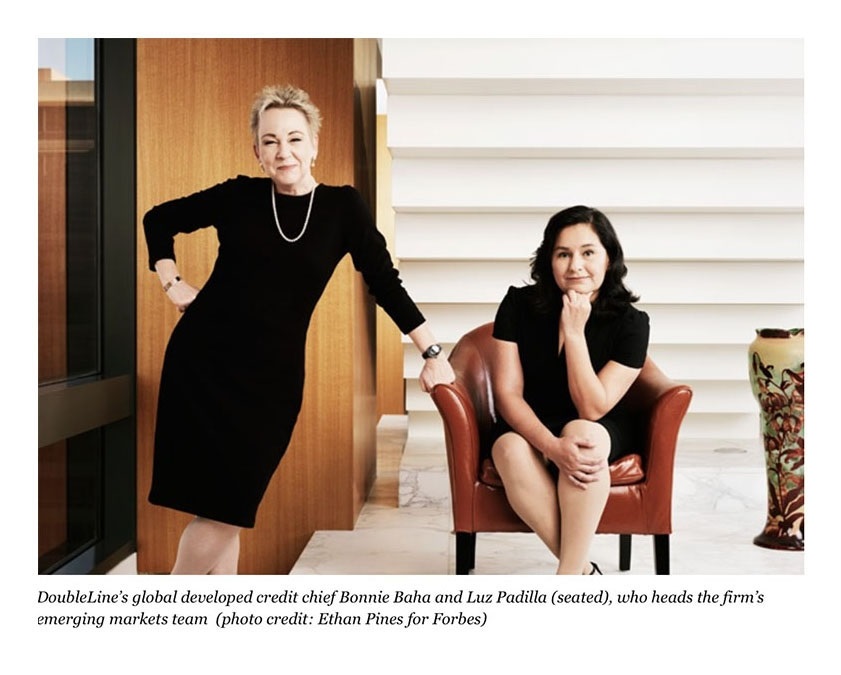 In the same way, I will always remember the exact moment when I learned that DoubleLine Capital’s Bonnie Baha had been killed in a pedestrian car tragedy while taking her child to college. I had just finished raving about The Bond Queen and The Bond King to my firm’s Chief Market Strategist, Burt White. Then, I walked over to the Research booth at FOCUS 2016, and relayed my admiration of Jeffrey
Gundlach and Bonnie Baha to our Research Team, when one of them had read the news the day before. My jaw literally dropped, and all I could say was, “No way. You’ve can’t be serious? That is unbelievable. That is the most unbelievable, sad news I have ever heard.” The same way that some people look up to rock stars, I am a Bond Guru Groupie. I am proud to say that Bonnie Baha was on my short list of people I was looking forward to meeting. I do not get star struck easily. 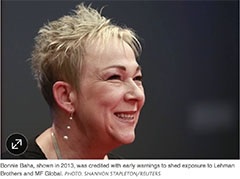 Bonnie Baha had been termed in the Financial Media a “Credit Markets Sherpa”. She got her employing firms out of bad debt before the debt became worthless, largely indemnifying her colleagues and investors by getting out of Lehman, M.F. Global, etc. and preparing for the overreaction of the bond markets to last December’s Fed rate hike.

I have long said that hearing words come out of Jeffrey Gundlach’s mouth is like “an expresso-double-shot for my brain”. It is like that episode of “Seinfeld” when Elaine dates the man who stops all conversation and must have absolute focus and silence when the song “Desperado” comes onto the car radio (let’s remember that “Seinfeld” was before the days of Spotify, Pandora and Playlists). I have a similar reaction when Jeffrey Gundlach conducts a webinar or appears on television or stage – Don’t stand in my way or distract me, anybody. This year, I especially noticed Financial Conventions with televised interviews of Gundlach, with his entourage of Bonnie Baha and a few others pacing in the camera background. Bonnie was unmistakable with her smart business suits and dresses and that spiky, stylized blond hair. Bonnie looked like a rock star and had the rock star name, “Bonnie Baha”, to match. Every time I saw her on TV, I thought to myself, “I cannot wait to eventually meet that woman. She is sooooo smart.” 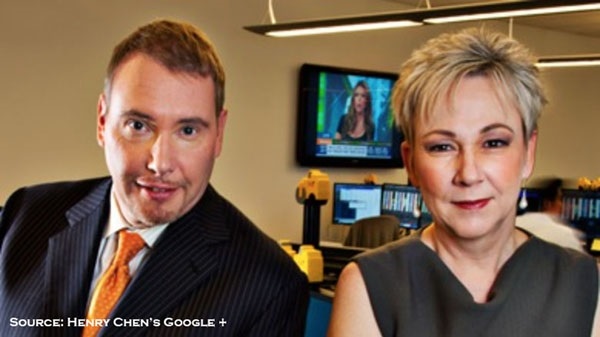 Bonnie Baha was one of the brightest minds in the investment world. We shared a passion for journalism, culture, literature, writing, human motivations and the behaviors behind the numbers. Bonnie personally commended my "Reading Between the Lines of DoubleLine" analysis article of her firm. “Reading Between the Lines of DoubleLine” was an article I wrote that “Financial Advisor Magazine” published in June 2015. This was a HUGE compliment coming from Jeffrey Gundlach's counterpart and kindred spirit, who helped grow DoubleLine Capital in under 7 years to a $102B firm (that probably isn't even counting their Private Equity, Hedge Funds and Non-Traded Leverage markets). Bonnie Baha worked with Jeffrey Gundlach at TCW and DoubleLine Capital for a quarter of a century, so for Bonnie to find my four-page analysis of her boss and company excellent was the biggest compliment anybody could have given me. It was as if the feedback came from the female version of The Bond King herself.

I initiated contact with Bonnie originally because I was doing some research on DoubleLine Capital for an idea I was working on, and I found out that the most Googled article to do with DoubleLine Capital was written by Bonnie Baha herself. Bonnie Baha wrote, “Why I Followed Jeffrey Gundlach to DoubleLine” for “Pensions and Investments”, published December 2, 2010. I think it is one of the most Googled articles the past 6 years to do with Jeffrey Gundlach because A) People want to get inside the genius brains of both Jeffrey Gundlach and Bonnie Baha and B) Jeffrey Gundlach is notoriously mysterious and a mystical leader, which the more you try to figure him out, the more there seems there is to figure out. But, Bonnie’s article gives people a start, with observations such as these – 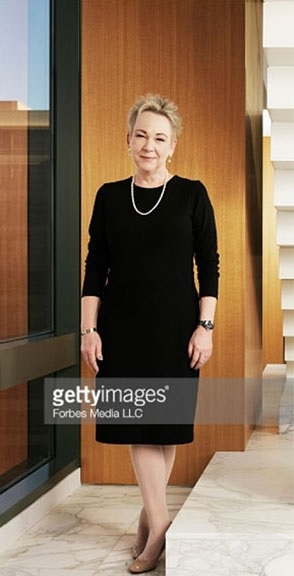 “Imagine the weight on Jeffrey: eventually more than 50 people would cast their fate with him.” (Jeffrey Started DoubleLine with 50 former TCW coworkers and was slammed with baseless lawsuits).

“To be perfectly honest, for most of the last two decades, I likely would not have described Jeffrey as a “nice” person in a George Bailey kind of way. However, like George Bailey, he is a good person and I have learned over the past 12 months that there is a material difference between those two human qualities. He doesn't suffer fools gladly. Many who work for him have been on the receiving end of his stinging rebukes…Yet many of these same employees jumped at the chance to follow him to DoubleLine.” (So, we learn from Bonnie, that Jeffrey Gundlach is good at the core.)

“Years ago, I actually worked up the nerve to ask Jeffrey why he sometimes behaved like such a frickin' jerk. Full disclosure: those weren't my exact words, and I was ready to receive my own Jeffrey thunderbolt in return. Instead, he came into my office, closed the door behind him and talked to me about his life for almost two hours. It's a conversation I'll never forget, or share.” (Well, true to her word, Bonnie Baha took this two-hour personal conversation with Jeffrey Gundlach, and all of its contents, to her grave. Perhaps in this conversation, forever sealed like a wedding vow, lies the secrets of true genius. I hope that Bonnie at least shared the conversation with her children, because they deserve to know the secret of true genius. Then again, they were raised by their mom, so they already have an “in” with genius, and something tells me that Jeffrey Gundlach will make sure that Bonnie’s family reaps the benefits of The Bond Queen’s greatness.)

“Working with Jeffrey on the trading desk and in investment allocation meetings, I never once saw him lose his composure or his ability to quickly assess events and make decisions — or lose sight of the client.” (Bonnie also writes of Gundlach’s brutal honesty, and we still see it time and time again, public appearance after public appearance. He always calls it like he sees it with other analysts, the Fed, the markets, the Central Banks, media commentators, everybody. Don’t cross Jeffrey Gundlach, or you will be sliced and diced and skewered publicly. He may spare you with just your initials. Then again, maybe he won’t. Gundlach has even been known to tell an Advisor on a call that his question is “stupid”. But, he IS all about taking care of his investors. Bonnie was right.)

“I still wouldn't call Jeffrey a “nice guy,” but he has become a nicer one. As should be obvious by this point, one of the benefits of being a part of Mr. Gundlach's wonderful life is that one develops a strong backbone.”

Bonnie Baha wrote this almost 6 years ago, and I still do not think that most would call Jeffrey Gundlach “nice”. But, Bonnie differentiated from the get go that Jeffrey is a “good” man filled with integrity and a sense of great responsibility to investors. And, if it is true that “Nice guys finish last” why the heck would Jeffrey Gundlach ever aim for niceties.

The late Bonnie Baha, 56, amazing, intellectual superstar (CFA, CIC, MBA), wife, mom, daughter, sister, media commentator, called a "Credit Markets Sherpa" by one journalist. I will never get to meet Bonnie, and I think she, along with her boss, Gundlach, are two of the smartest investment minds in the world. There are not a lot of true geniuses in the public eye if your standards of genius are as high as mine – The “Steve Jobs type of genius”. Jeffrey Gundlach is one of the true geniuses, and Bonnie Baha was a quiet genius and had one leg over the fence and was on her way to stepping out as “The Bond Queen”. She was always careful not to upstage her boss, Gundlach, though she could have very easily. DoubleLine Capital is smart enough to know it only needs one publicly anointed royal sage at a time.

According to the “Wall Street Journal”, Bonnie Baha is survived by her husband, Mustapha, and children Ayman, a college Freshman, and Miriam, a recent college graduate. May we all pray for Bonnie Baha’s loved ones. It is so unfair that your great Bonnie was taken from you in her prime. Her legacy lives on in you, her writings, her media appearances, and the great stewardship of investor funds at DoubleLine Capital. Jeffrey Gundlach lauded the team of a hundred that Bonnie personally built on his September 8th, 2016 DoubleLine Capital “Turning Points” webinar.

The “Wall Street Journal” said, “She wasn’t tied to numbers and spreadsheets,” said her sister, Virginia Niten.  “She was very much drawn to how people are going to behave.”

The same “Wall Street Journal” article points to Bonnie’s birthday in early November, making her a Scorpio astrological sign. Media also points to Jeffrey Gundlach’s birthday in late October, making him a Scorpio astrological sign. Scorpios are known to be wildly successful and fierce in business, intensely loyal, mysterious, fascinated by human behavior, highly intelligent and unforgiving to people who ever cross them. It makes perfect sense to me that a Scorpio Bond King would find his perfect match in a Scorpio Bond Queen. And, if you don’t believe in astrology, then presumably you believe in numbers, and neither Jeffrey Gundlach nor Bonnie Baha’s numbers lie.

** If I may give another posthumous shout out to Bonnie Baha – Thank you, Bonnie, for personally connecting me with Ron Redell and encouraging me to bring my idea to Ron for further exploration. It is in the works at LPL Financial, and when launched, I will have you to thank for reaching out to me personally and going out of your way to make the right personal connections for me within your amazing team at DoubleLine Capital.